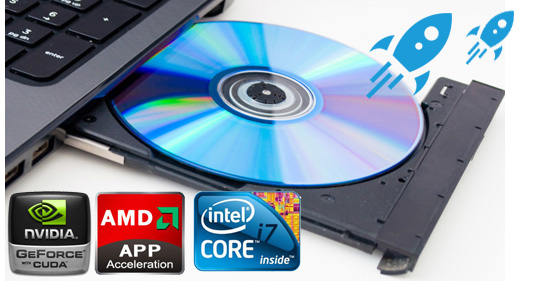 EaseFab LosslessCopy takes full advantage of the NVIDIA CUDA technology and AMD ® Accelerated Parallel Processing (APP) to largely accelerate video encoding speed. The GPU acceleration saves users time when encoding Blu-ray/DVD disc or digital video files to H.264 codecor H.265 codec. With a PC running on a CUDA-enabled Graphics card, or an AMD graphics card with AMD APP technology, the conversion speed of EaseFab LosslessCopy is about 30X faster than before. Meanwhile, more CPU resources are spared for other applications, that is to say, your computer will run much smoother and faster than ever before when you using EaseFab LosslessCopy to do format conversion.

The performance of EaseFab LosslessCopy software with GPU acceleration

Simply click "File" > "Load from Disc" to load your Blu-ray and DVD movies. Then Choose "H.265 MP4 Video" or "H.264 MP4 Video" in "Format" drop-down list. Now, move your cursor to "Tools" button on the top of the main interface to choose "Options". Then you can enable GPU acceleration. 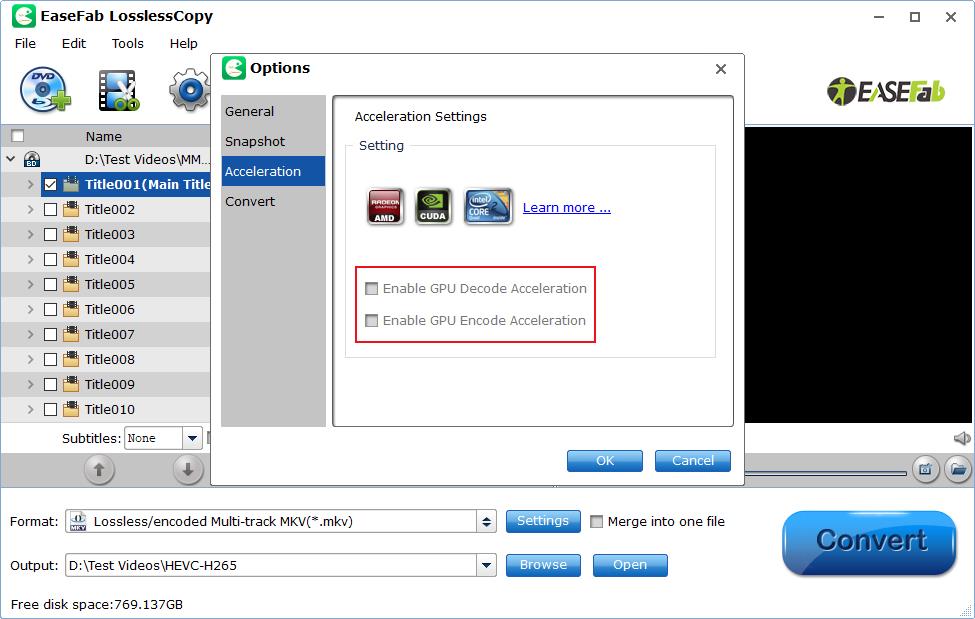 The Theory behind GPU Hardware Acceleration

Hardware acceleration refers to a kind of efficiency promotion technology in computing field, substantially on the basis of hardware, especially GPUs (Graphics Processing Units), through execution of a set of special algorithms. More specifically, it focuses on transcoding and processing DVD videos using encoder/decoder in GPU.

It should be clear by now that hardware acceleration is a necessity for its huge advantage of helping decode encode video on the double. And it is no exaggeration to say that the power of GPU is finally unlocked correctly. But that's not a wrap. The theory behind hardware acceleration is in store here, supposing that all people are dying to hear why.

To describe it in one sentence: the main principle of hardware acceleration is to offload compute-intensive operations from CPU to GPU through specific API (Application Programming Interface)/SDK (Software Development Kit) to make video encoding decoding processing more efficiently. 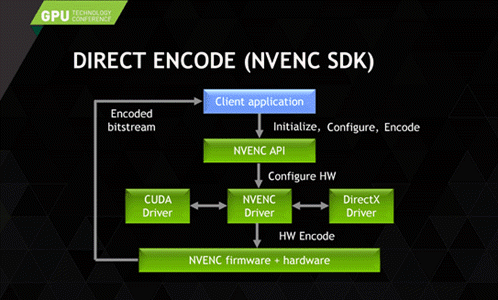 Here take direct video encode with Nvidia CUDA/NVENC as an example. Each step is visualized to show the theory behind it.

The flow is going like this:
- The client application (software) interfaces with hardware devices through API provided by computer hardware manufacturers, to access hardware capabilities.
- Then get the hardware devices Initialized and configured, and deliver the to-be-encoded video data to Graphics Driver via API.
- At this stage, graphics driver will work together with others like CUDA Driver or DirecX Driver if necessary.
- Once it gets ready, the graphics driver boots corresponding firmware and hardware to do the video encoding.
- The encoded bitstream will then be passed to software.

How Does EaseFab LosslessCopy Software Make Use of Hardware Acceleration?

It can be broken down into two big parts performed by software and hardware respectively:

- Firstly, EaseFab LosslessCopy software extracts video audio data block from source Blu-ray or DVD and decrypts it into original M2TS or MPEG-2 bit stream packet.
- Then it will be passed to hardware for decoding into raw data. (HWDec)
- Next, based on users' requirements of the output image, different hardware accelerators are executed to process the raw data. (Processing)
- After the processing, the data will be sent back to the hardware for encoding. (HWEnc)
- The final step: software packages the encoded video audio data into a standard multimedia file format.