"Hello, I'm running KODI 17 on a PI4 with BUSTER. My movie archive is on the Synology NAS. I can play all file formats except .iso. When I select one of these .iso file the 2 blue circles keep on turning for about 20 seconds. Then it stops without any error. Does anybody know what can be wrong and how to open .iso files in kodi?"

As above, Kodi ISO playback issue has been asked frequently, but there are still many people feel confused about it. Follow this article to find out why ISO playback fails on Plex and how to play ISO images in Kodi on your television or computer without any trouble.

Does Kodi Support ISO? Why Some ISO Files Not Playing in Kodi?

Yes. Kodi (previously called XBMC) is a multi-platform home theater software that allows you to manage all media files systematically. And it has officially stated that it provides native support for playing DVD-Video movies stored in ISO and IMG DVD-images or DVD-Video (IFO/VOB/BUP) images. Then why some ISO files fails to open in Kodi?

As we all know, an ISO image is an archive file of an optical disc, a type of disk image composed of the data contents from every written sector on an optical disc, including the optical disc file system. ISO image files are uncompressed files and ISO image do not use a particular container format. Technically, Kodi has sufficient technology to categorize and organize the archive file by genre just like what it would do to other files. When you drop your ISO image file to Kodi, it will start automatically to organize the file first and then you may hit on the target file for direct playback.

If you accidentally failed to play ISO files in Kodi, it may be caused by the encryption on the ISO file or the ISO file does not conform the DVD-video structure. Another reason may be related to your ISOs are from TV series DVDs and Kodi goes nowhere to recognize a bunch of episodes in the ISO image file. These reasons are probably only the tip of the iceberg for ISO file not playing in Kodi on TV and computers. More often than not, ISO file won't play with Kodi with no reason, leading to no way to fix it. Worse still, the encryption tech such as Sony/Disney DRM has always been an insurmountable obstacle for playing ISOs in Kodi even with libdvdcss installed.

Similar to DVD disc, ISO image files are often large and can't be played directly on most mobile devices. And if you're facing ISO playback issues in Kodi, converting ISO image file would be the best approach to fix the issue. To do this, EaseFab DVD Ripper is a nice option. It allows you to convert DVD ISO image files to MP4, MKV, MOV, AVI, WMV, VP9 and other mainstream video formats with fast encoding speed and zero quality loss.

In the following guide we take EaseFab DVD Ripper (Windows version) as an example to show you how to convert ISO to digital files for Kodi. Mac version shares the same steps.

Step 1. Launch EaseFab DVD Ripper on your computer. Click IFO/ISO button to load the DVD ISO image file you want to convert. Batch conversion is supported so you can add multiple ISO image files to convert at a time. 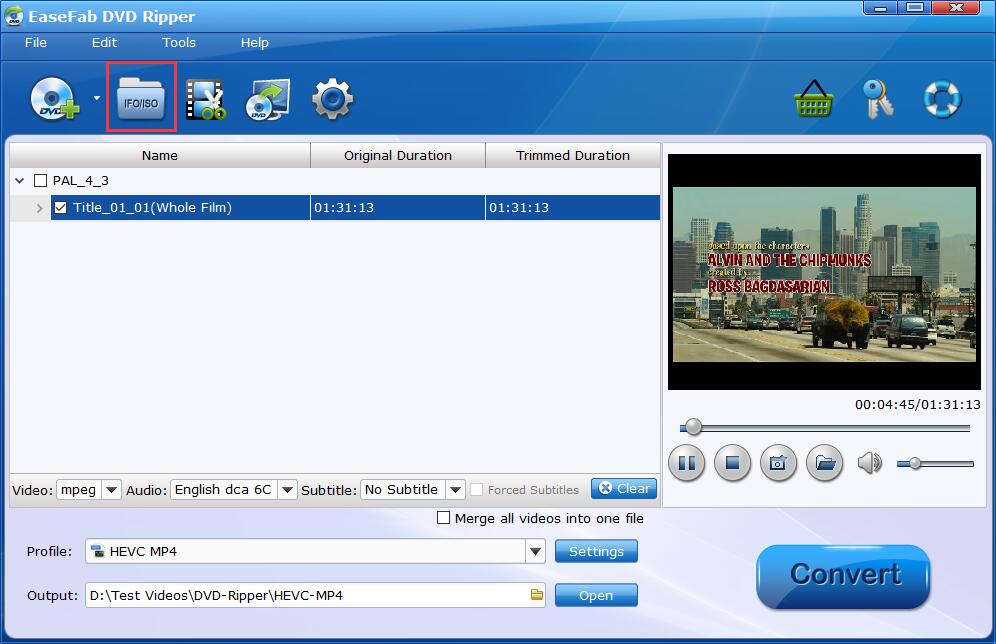 If you got a problem with playing ISO image files in Kodi on TV or computer, converting ISO image with a third-party program like EaseFab DVD Ripper will be an easy and efficient solution. Besides, you can turn to other media players to have a try. Nowadays, many video players have support for ISO image file, such as VLC Media Player, 5KPlayer, SMPlayer, KMPlayer, VSO Media Player, and more.