Many people want to convert AVI to MPEG-2 for playback on DVD player, TV or burning DVDs. The reason is mainly that MPEG2 is often designed as a standard format for TV stations, TV receivers, DVD players, and other equipments. If you're looking for an easy way to convert MP4 to MPEG-2 on Mac OS X(including Yosemite), then you're definitely being the right place. This article will recommend a powerful video conversion tool to let you easily convert MP4 to MPEG-2 files with high video quality output and super-fast conversion speed.

To convert MP4 video to MPEG-2 on Mac (Yosemite, Mavericks, Mountain Lion and Lion included), you can adopt EaseFab Video Converter for Mac for help. This program directly provides users with the optimized "MPEG-2" output format. You just need to select it with one click and then this app can do the rest thing for you. The conversion speed is ultrafast and the output quality is wonderful. The tutorial, which shows the Mac MP4 to MPEG-2 conversion in details, would use one excellent in quality to do the job, which offers functions like: finish the Mac conversion at fast speed keeping the video quality or adjust the video effect to set the brightness, contrast, saturation and volume etc.

Next, I'll show you how to perform AVI to MPEG-2 conversion on Mac. If you're a Windows user, you can simply turn to the Windows version, which has the same function as the Mac version.

1. Add MP4 videos to the program

You can directly drag your local MP4 videos to this program, or you can click the "Add Video" button on the main interface to add MP4 files to this application.

Pick "MPEG-2" under the "Common Video" section in the Profile tray. In fact, the Mac software has a wide range of supported formats and allows users to edit the video files by cropping, adding effects etc. to the video files before the Mac conversion starts. 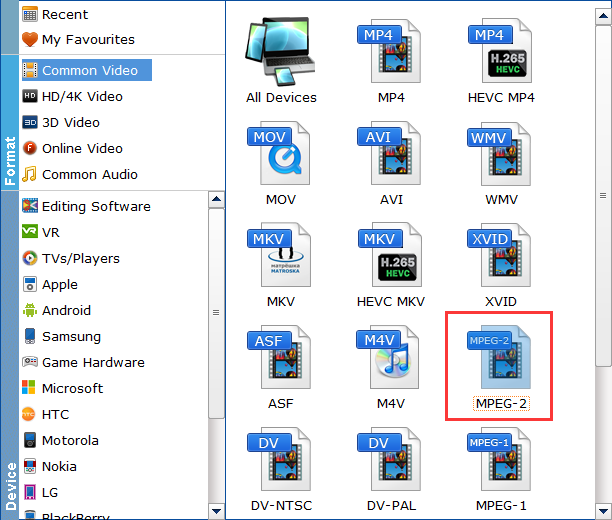 Just hit the "convert" button, and leave the smart Video Converter for Mac to finish the rest for you. In addition, if you are too busy to wait for the end of the task and happen to have to leave, you can set "after the conversion shut down my computer" which then makes the smart MP4 to MPEG2 Mac application automatically shut down your Mac.

How to Convert MP4 to Apple ProRes Codec on Mac

Here is a simple guide on transcoding MP4 to Apple ProRes 422 or ProRes 4444 codec without any quality loss. Also we will explain why you should use Apple ProRes instead of MP4 for your edits.

PS4 won't play MP4 files? This tutorial explains the reason and walks you through how to get MP4 files and Sony PlaySation 4 to play nicely.

This article will figure out why Samsung TV not playing some MP4 files and how to fix this issue easily.

In this article, you will the possible and main causes of Sony TV not playing MP4 videos. Also you will find an easy way to solve the problem.