Here is how to easily and fast rip your Blu-ray collection, including UHD 4K discs, so that you can save them to cloud storage services like Google Drive, Dropbox, OneDrive, Amazon Drive, iCould etc.

To this day, Video streaming subscription has surpassed physical media as a more popular choice for home entertainment. And there are very few ways to watch your Blu-ray disc on your PC or Mac without shelling out cash for the privilege, even if you already own a external or internal Blu-ray drive and bought your movies. Instead, it's simpler to rip and convert your Blu-rays to cloud-friendly format so that you can save digital copies to cloud. This way you can not only save up your local storage space, keep your Blu-ray discs from scratching, but also be able to access to your file library on various platforms as long as internet connection is available.

This way, you don't need to swap discs, you can play your movies in any app you want, and after uploading the result Blu-ray rips to cloud or something else, you can keep your Blu-ray digital library secure and stream them on demand to whatever cloud-compatible devices. If you want to digitize your old DVD collection and store them in cloud, this process will work as well. But we'll focus on Blu-rays. If you're interested in uploading your Blu-ray movies to cloud storage services, such as Dropbox, OneDrive, Google Drive, Amazon Drive, and iCloud, keep on reading for details.

What You Need to Rip Blu-ray to Cloud-Friendly Formats

● A program to rip the files. We'll be using EaseFab Blu-ray Ripper in this guide, which is an excellent choice to fast rip Blu-rays yet DVDs to digital formats supported by cloud (Dropbox, iCloud, Google Drive, etc.). It's available for Windows 10, 8.1, 8, 7, etc. And it has a Mac version compatible with macOS Big Sur and lower.

◉ Digitize Blu-ray to MP4 (H.264/HEVC), MOV, AVI, MKV etc. for saving on cloud, hard drive, or playing on PC, HDTV, phone, tablet, etc.
◉ Minimize Blu-ray file size (up to 94% smaller) with high quality to reduce the bandwidth consumption and save Blu-ray to cloud uploading time.
◉ Blazing fast speed to accomplish Blu-ray ripping. It won't take you too much time to digitize a heap of Blu-rays and DVDs. 5 mins only to rip a single one.
◉ Any types of Blu-rays and DVDs are supported, no matter the old Blu-ray/DVD discs, new releases, kids, Disney 99 titles, or slightly damged ones.

Why Should you Use EaseFab Blu-ray Ripper instead of MakeMKV?

MakeMKV is the first choice of many users when it comes to extracting MKV from a Blu-ray without quality loss. However, the output format is limited to MKV and the generated MKV file from Blu-ray disc is always in huge size (almost as the same as the original Blu-ray discs at 25-50GB). The huge MKV files will takes lots of time to be uploaded, or even can be uploaded to almost all cloud storage services. Let alone stream them to your smartphone, tablet or other device.

To begin with, you need to download and install EaseFab Blu-ray Ripper Windows or Mac version on our computer. The guide below takes the Windows version for an example. Mac version has the same process.

Launch EaseFab Blu-ray Ripper and then insert your Blu-ray disc into your Blu-ray drive that have been connected to your PC. Click Load Disc button to load the Blu-ray movie you want to rip for cloud storage. BDMV Folder, ISO image and VIDEO_TS folder can also be taken as source for decoding.

This Blu-ray ripper will easily detect the correct title hiden in Blu-rays. At the bottom, you can select your desired subtitle and audio track.

The selection of output format depends on your specific need:

1. If you only need to store Blu-ray digitally and put the movie library to the cloud, you don't need to consider about the format matter. Generally, almost all the mainstream video and audio formats are supported by the cloud service. If you are still unsure of the media format, check the table below.

2. If you desire to play the converted Blu-rays on Apple TV, iPad, iPhone Samsung table, PS4, Xbox One and any of other portable device, you can choose directly from the device profile listed on corresponding device category.

3. For general uses, MP4 (codec: h.264+aac) in Common Video is recommended, as it is widely supported by many devices and media players. If need to get a good balance between file size and output quality, flexible options are offered to further reduce the size of the ripped video. Click Settings button beside the profile bar and enter into the parameter settings page. A slew of other variables such the video/audio codecs, pixel dimensions, frame rate, bit rate, audio sampel rate, etc. will help convert a Blu-ray at 40.1GB to a smaller MP4 file at about 1.5-2.5GB in size to make more room. 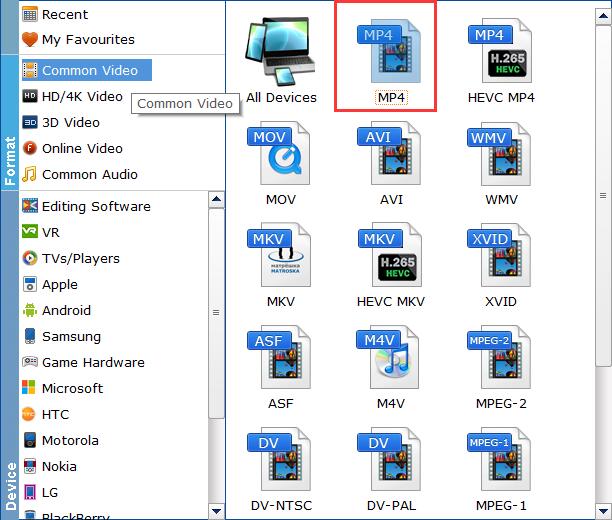 ◆ You're not suggested to adjust the frame rate and aspect ratio, if not necessary.
◆ Lower the bitrate to a lower level. Adjusting the original Normal quality to bitrates of around 1800-2000 is acceptable and can make your ripped MP4 movie around 1.5-2.5GB in size, 94% smaller than the original Blu-ray movie, and to the naked eyes, it's highly unlikely to distinguish the difference between the original movie and the re-encoded video.
◆ Lower the resolution. Typical Blu-ray videos are 1920×1080 (Full HD). Adjust the resolution to lower 1280×720 or higher won't make any quality difference.

Click "Folder" button in the Output bar, and select a destination folder to save your rip.

Just click "Convert" button to start ripping the movie to the digital file accepted by your cloud storage device.

How to Put the Converted Blu-ray Videos to Cloud Storage Device?

Once being converted to digital files, your Blu-ray rips can be transferred to the cloud service, and streamed later for different uses.The steps of uploading Blu-ray movies to Amazon Cloud, OneDrive, iCloud, Box, Google Drive etc. go the similar with Dropbox. Just follow the on-screen wizard to save dvd digital copies to your favorite cloud service.

Here we take how to upload Blu-rays to Dropbox as an example.

Note: The total movie size should be less than 50GB if you upload the movies through your web browser. In another word, you can just upload around 20-40 Blu-ray rips to dropbox.com at a time.

Outstandingly, cloud service makes movies, music and photos more portable. Only if you have an online account, you can use the movies on your home PC, work PC and portable PC, stream it to an app, Chromecast, Smart TV, Roku player or a set-top box.